The one with the t-shirt theft 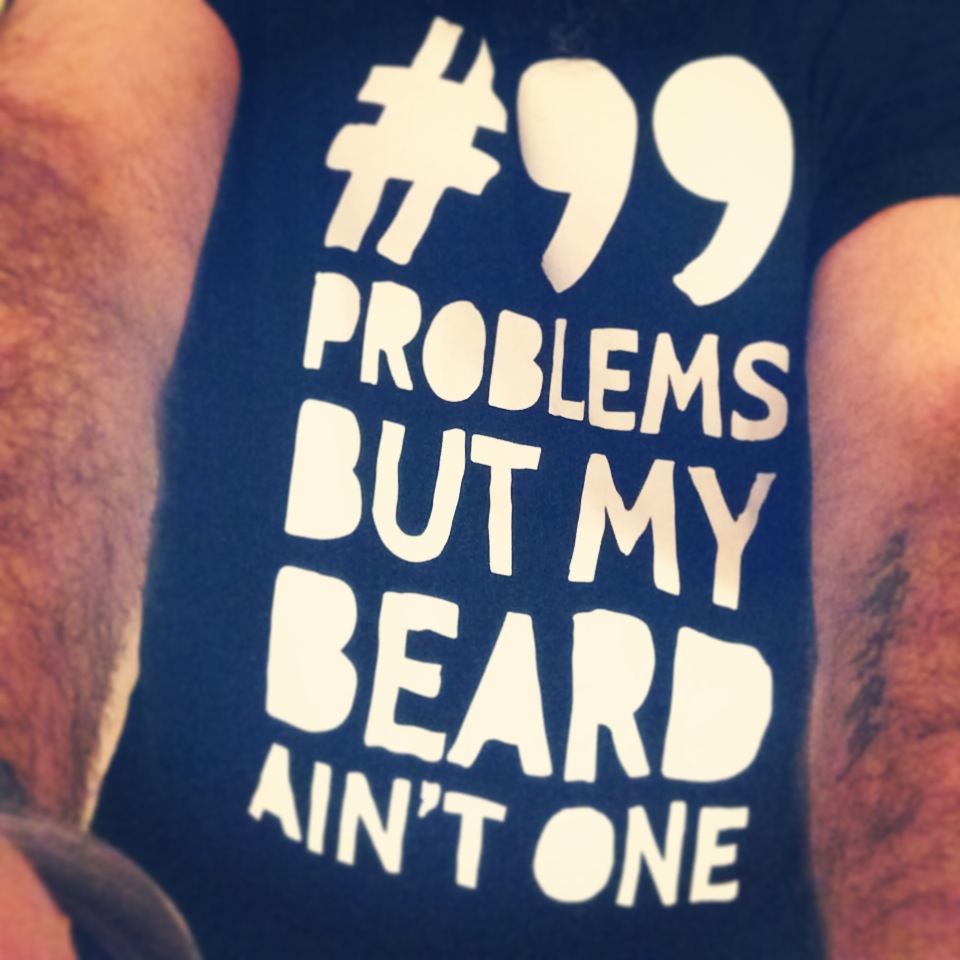 It’s been a while, but only because I’ve been hard at work on certain projects. This post might get a little long because I think it’s important to get all facts out there. They say “imitation is the sincerest form of flattery”, well that was actually Oscar Wilde. But, when someone you actually know and they know you, rips off something you have been working on for a while, it makes you think for a moment, “What the hell?!”

As a lot of you may know, I recorded a comedy parody track last year called “99 problems but my beard ain’t one”. Obviously this was a take on the Jay-Z track, but it is a parody and allowed, the video is set to release soon. I’ve used a hash tag on twitter, Instagram and Facebook #99problemsbutmybeardaintone. Also produced a set of  T-shirt designs and a number of other projects that are in the pipeline. I would like to point out at this stage that none of this was being done for monetary gains (for those that don’t understand – “mans ain’t makin’ dollar fo’ it!”). I love creating and this is what I was and am doing!

Last week I was shocked to learn that two brothers that I actually know, have chatted to, who have complimented me on the comedy, have asked me about the “99 problems but my beard ain’t one” t-shirt – went ahead and ripped off the phrase and produced the T-shirt for sale on their new website. I spoke to one of the brothers on the day and he assured me it was a one off for himself, which I thought, “ok, thats fine, since I know you”. I had even given them a print of one of my t-shirts for the shop. A couple of days later I find out through the means of facebook and instagram that the other brother had produced a website, stuck up the design for sale and were using this as their main focus to sell the website!

I have asked them politely to remove the t-shirt as it was originally my idea. The wheels have been and were in motion for it to progress further. What I think really got to me was who it was that actually done the plagiarism! I’ve given them a chance to withdraw it without me outing them, but I received a message last night which seems like they are going ahead with it. You might be surprised to learn, as I was, it is none other than the boys at “Super Singhs Vegetarian & Vegan Restaurant · Pizza Place · Take away restaurant”. These are two brothers, Inderjit and Jaspal (JP) Khehra who set up the takeaway place and hats off to them, the food is really good, credit where credit is due.

Now they have set up a t-shirt website called www.sikhtees.co.uk where it states “…WE PRIDE OURSELVES ON MAKING NEW ORIGINAL DESIGNS THAT YOU HAVE NEVER SEEN BEFORE AND PUTTING THE FUN BACK INTO SIKHI.” – I’ll come back to a whole manner of “Hadoukins” for that statement after I saw the site!

So I left a message on JP’s Instagram asking what was going on with this t-shirt. He originally responded by saying something like “it’s all over the internet, inspired by you”. He deleted my original response and made it into his own. I was stating the difference between the phrases which was key in identifying it as mine. The messages so far are below.

I thought I had stayed quite calm at the  stupidity that stared me in the face whilst reading his messages. His reasoning for deleting the messages was that he didn’t want “his fans to read it” and also I was “pissing him off”. I think somebody might’ve had too many protein shakes there.

Indy then messaged me on Whatsapp and without putting up the long winded chat. Their defence is that they “thought” that I was not going to sell them, so they went ahead and started selling them! If only this would stand up in a court of law eh?! Neither of them seem to understand Intellectual Property Rights. Plus, I would not sell them to make money for myself, it was always the intention and still is that the profit would go to charity

The phrases are exclusive to me on the basis that I devised them, albeit a parody of an existing work, they were not devised for profitable gain and have thus far not made any financial gain. “Basically bruv, what he’s saying is he ain’t making money on it, ya get meh, so its an exclusive design” These guys have just wanted to line their pockets as Indy confirmed “..yeh it is about money i need it to grow business…” – WOW?! So you rip off a so called friend’s idea to line your own pockets – I don’t think thats either ethical or moralist, do you?!

The simple fact is, Super Singhs have stolen artwork, concept and wording that I have worked on building up through videos, blog posts, t-shirts, Instagram, Facebook, Twitter and Stand up comedy. They admitted that they took the idea from me. This is the stand alone idea of the design concept which is what is protected under the copyright, UNLESS they can prove they had the idea before me. Indy even has a picture on his Facebook of me wearing the t-shirt. It has nothing to do with the original works (Jay Z) or what anyone else has produced.

This is their website’s mission statement. Wait, did they say, “never seen before”?! I doubt this very much. “Putting the fun back into Sikhi” – With a t-shirt that focuses on castes “Drop it like a Jatt”, I really struggle to think which part of Sikhism that might focus on!

People need to make money to live, I understand this, but DO IT HONESTLY! There’s no need to ride on the back of someone else’s idea. be unique, we all are. They were deleting messages because they know that the concept was already out there and they didn’t want people to find this out, although, a lot already associate me with the statement.

This is definitely not about money, its about principle. They have gone about it in the wrong way and I think they should stop selling the product and think of something more unique for themselves.

I have added an open letter below. Lets see what the people think, I would suggest the boys actually take note on what they are doing and rectify the 99 problems!

2 Replies to “The one with the t-shirt theft”

Don’t worry Hydro we got your back…we know who the originator was here…and SikhTees…lol what an awful collection of T-shirts!

This is completely put of order Hyde. These guys really should take a step back and educate themselves on IP. It seems like even the name of their takeaway was ripped off from others of the late 90’s. “SuperSingh” I’m quite sure belonged to someone else but as that person didn’t pull th up on it, they think they will get away with this. Supporting you all the way bro.