The one with the Rishta Whore 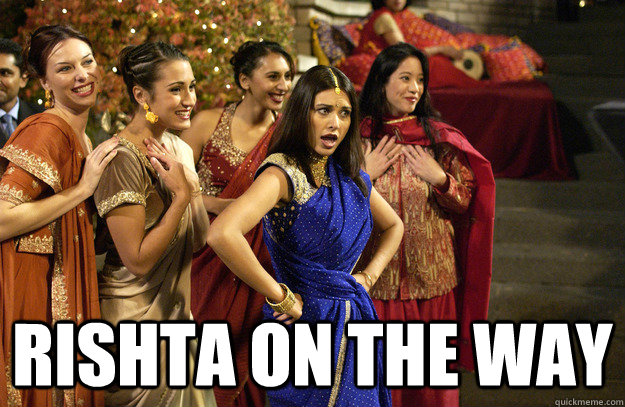 For those of you that don’t know “rishta” is the Punjabi word for “introduction to a potential marriage partner” which probably now puts the title of the post into perspective! I was talking to a friend of mine, as you do, and we both came to the realisation that we had had far too many introductions – for both our likings.

Since I can remember I’ve always had a romanticised view of meeting the love of my life, I blame Bollywood for these unrealistic expectations – as many of us probably do! Music does not magically start playing when you lock eyes, I cannot be shot and still perform a song and dance number and I’m certainly no good at chatting to a lady in Hindi, Punjabi or English for that matter! Either old(er) age or cynicism has made me realise, it’s never as easy as boy meets girl. Especially when you’re Asian! It’s more the case of, parents meet introducer, introducer meets parents, parents TELL boy, parents TELL girl, parents set date, couple get married, boy meets girl! Ok, so maybe that’s slightly exaggerated, but I think you get the gist.

As a 31 year old, single, comedian, where I come from, that makes me a social leper rather than a suitor. That was before I even donned the turban and beard. I think it all got more interesting after that. I gained a bigger sense of humour to my approach to meeting a woman. I think I expected less. Maybe because, one, I’d watched enough Bollywood movies to know they should all be placed in the fantasy genre and two, some of the things that would exit these women’s mouths!

Now before you read on, this is most certainly not an attack on women, far from it. It’s just my view on a little of what I’ve experienced whilst being introduced or meeting them. I’ve made it sound like it’s a hobby of mine. I assure you this is not true! Although I have experienced a few crazy things – the one who got engaged to someone else while I was still with her, the one who followed me home, the one who sat outside my house, the one I never met cos she was always “too busy” and the one who’s mother liked me more (not in a Stifler’s Mom way!) So this might cause my anxiety to rocket, hmmm. I am often confused!

Then I get the usual comments “When are you getting married?”, “Hurry up and find someone” , “Why are you still single?”, “You’re STILL single?!”, “You must have a girlfriend… or two?!” – assumptions, people, are certainly the mother of all f*ck ups! I mean it’s not through a lack of trying, clearly, the mothers have no problem with me, it’s the daughter I can’t crack!

I came home once to hear my mum on the phone to an “introduction”.  She had a smile on her face like I was already engaged! Then she dropped the B-BOMB on the mother. “Yes, my son has a full beard” – her smile disappeared, she was listening, then retorted “Well maybe you should’ve taught her about it before then!” I think the conversation was coming to an end and her hopes of a wedding died with the signal. Turns out, the lady had commented on the fact that “Why are there so many Singhs now and they’re keeping their beards. My daughter doesn’t want that” – thats the paraphrased version, confusing since she used Kaur in her name. Suffice to say, it struck a nerve. I laughed, as thats less than what I had come across. Some had even asked the question “When are you going to shave your beard?” Humorous, since she had one herself, so hardly one to judge! I’m a vegetarian and have been asked “So you don’t even eat fish?!” – just in case you’re wondering, that’s an animal too – I KNOW, the cheek of ’em! I was even asked if I regretted being baptised, without hesitation, the BEST decision of my life.

Even though beards have recently become a “fashion accessory” – I can assure you that mine is more of a statement of commitment. Aside from that, they have many other uses, definitely keeps my face warm (and hers too!) and a great aid to when I’m having a thought. I am a patient man, because if she doesn’t like the whole mane of a lion type guy, she sure as hell won’t like me. I read a great quote today… “A woman’s heart should be so hidden in god, that a man has to seek him, to find her” – so there may be a miracle yet and obviously I need to meditate more. I can however say, without a shadow of doubt, I have 99 problems but my beard ain’t one! I think there will be a book to come of this. “Diary of a Rishta Whore”